It was the year 1997, when Mr. João realized that he would have to start making his much-coveted Frenchie sauce, which, already marketed for cafes, needed to be produced more intensely, such was the demand! The Dom Duarte brand appears at this time!

This delicious product was at this time kept in rigid plastic packaging and then frozen.

The adhesion to the sauce was such a success that Dom Duarte needed to resize its production against demand. The solution was an investment in a production line where the sauce began to be packed in glass jars.

With the success of Molinha Francesinha, there is a desire to continue impressing our avid consumers, but now with other sauces, such as Bifana Sauce, Moela, Cachorro especial and Churrasco.

In order to reach all those who sought the quality Dom Duarte, we began to appear in the retail and in the big surfaces.

And as we have a certain taste par excellence, we thought to extend this quality Dom Duarte, also starting to produce teas and infusions (no fuss!), Spices and delicious seasonings for those special dishes.

And throughout the whole process, in full awareness of the importance of traditional and homemade, we have always been privileging natural ingredients and traditional formulas.

We pride ourselves on the quality of our ingredients and feel the recognition of our consumers.

We promise to continue to amaze and impress with unique and special flavors. Because their dishes deserve the best of flavors. 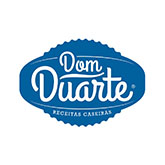